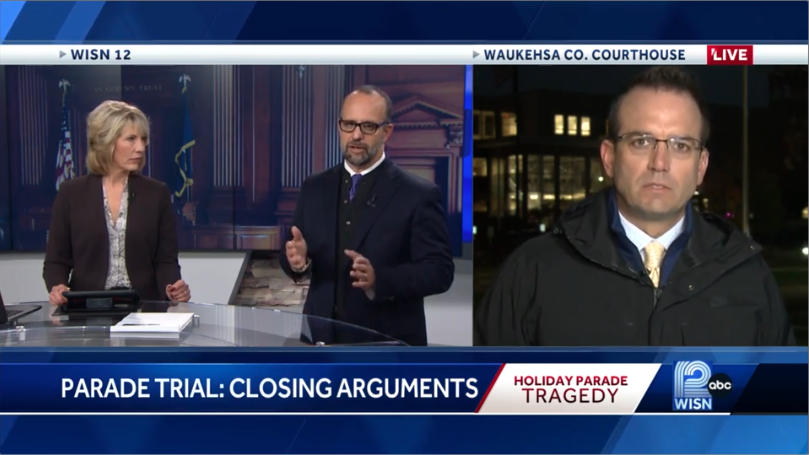 Legal Analysis: What to Expect at the Darrell Brooks Sentencing

Sentencing hearing begins today after trial convictions in the Waukesha Christmas Parade tragedy. Craig Mastantuono wrapped up his contributions as legal analyst for WISN/ABC Milwaukee discussing the sentencing hearing and what Judge Dorow will consider when setting Mr. Brooks' sentences. Excerpts from that interview are available in the article below, as well as on WISN's website, which is linked below in the article title.

Darrell Brooks sentencing: What the judge will consider

"Judges are always required to look at the same three things. How bad was this offense? What is the character of the person who committed it and what is the public need in order to be protected in the judge's sentence? And Mr. Brooks breaks off the charts negative really in all three categories," said attorney Craig Mastantuono with the law firm Mastantuono Coffee & Thomas SC in Milwaukee.

Over the course of two days, 45 victims will verbally read victim impact statements. Nine of them will be children.

Dorow has ordered the faces of minors will not be shown publicly unless their parent allows. Each speaker will get five minutes to read their statement.

Prosecutors filed numerous other victim impact statements with the court.

"I think that the drama and the emotion of what we're going to see in court will be presentation after presentation by victim family members and victims saying, 'This is what you did to me,' 'This is how you affected my life.' And that can be extremely powerful for obvious reasons. And so the human toll of what occurred is going to have kind of an out letting through two days. And that's why the judge set aside so much time as to give everybody their say. This is a case where a lot of people were hurt or killed, and so that affects an entire community," Mastantuono said.

Brooks gave the court a list of nine people expected to speak on his behalf, including relatives and his mother Dawn Woods.

His grandmother gave WISN 12 News she plans to read over Zoom on Brooks' behalf.

WISN 12 News asked Mastantuono that with the expected life sentences, would Brooks have the possibility to be eligible for parole?

"With six first-degree intentional homicide convictions, the chances are slim to none that the judge is going to set any of these parole eligibility dates within Mr. Brooks' expected natural life," Mastantuono said.

Those who will speak will deliver their victim impact statements from the podium.

Each victim speaking may have a support person at the podium, two if a minor.